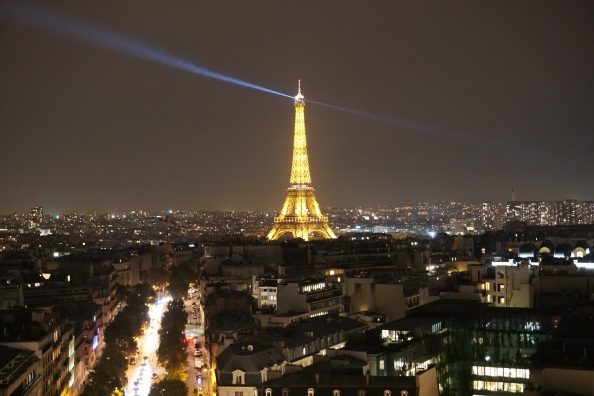 We spent three and a half days in Paris and loved every moment of it. From the minute we stepped off the plane, there was a magic in the air we haven’t felt anywhere else. It was the excitement of a big city, blended with the beauty of French architecture, and then a lifestyle that focuses more on savoring a baguette, that sip of wine, and time with company – rather than just rushing to your next destination.

Like any place, it’s impossible to do everything in just three days, but we certainly did a lot, and we hit up everything we wanted to! So if you want to go to Paris once it’s safe to travel again – we’re sharing our itinerary with you.

It’s the city of lights and the city of love, and taking advantage of both, makes for the most mesmerizing time.

We took a red-eye flight into Charles De Gaulle airport and then a train into the city. Once we found our hotel, Hotel Paris Louis Blanc, located in the Montmartre district, we took a quick nap and then decided to first explore our new neighborhood.

We hit the streets taking in the charm of Montmartre and found ourselves at Sacré-Cœur, a white-stone church known for the domes in its architecture, that sits atop a hill. As we climbed up to get a closer look, we turned and looked back – the view of Paris nothing short of amazing.

Our first French meal was dinner at Le Relais Gascon – très magnifique as Peter described it. As if Paris itself wasn’t so wonderful already, the French food scene numbps it up even higher.

After dinner, we took an uber to the Champs-Elysées neighborhood to take in a sight so breathtaking, I was overcome with emotion. The sun had set and we climbed the 284 steps to the top of the Arc de Triomphe to see the city of lights shine at night. As we looked out across the city, there it was, our first glimpse at the famous Eiffel Tower. We couldn’t leave the view, we continued to take it in, and it’s a good thing we did because as the next hour struck, the Eiffel Tower began to sparkle – a spectacular light show that happens on the hour from sunset until 1 a.m.

We capped off the night with a few drinks at La Guincheuse – friendly neighborhood vibe, great service, and delicious wine.

On the recommendation of a friend, we booked a Free Tours by Foot – a guided walking tour of Paris’ main sights (they have these tours in cities all across the globe) – and the only cost is the tip for the guide at the end. Peter says this was his favorite part of the trip!

Here’s the main sights we saw, but there’s so much more to a walking tour than this. It’s about taking in day-to-day city life and walking in the shoes of the locals.

We spend the rest of the afternoon indulging in ham-and-cheese sandwiches (not your average lunchtime sandwich, a French ham-and-cheese is a sandwich like no other) and shopping (the clothes, the shoes, the purses are like something out of a dream)!

That night we decided to see the Eiffel Tower’s glimmering lights show up close and personal and watched from directly underneath the tower itself – we were filled with. such wonder.

And then we rounded out day two with a couple of glasses of French wine.

We couldn’t leave without seeing The Louvre and the famous Mona Lisa.

On our walking tour we learned The Louvre is so expansive with more than 400,000 objects and paintings… Nobody is seeing that much art in a day. Calculations we found said it would take 75 to 100 days to see everything!

So, have a PLAN for The Louvre. Check out the website beforehand to look at the map and decide what parts you want to see and head straight for those pieces. We picked three sections to focus on (ended up visiting four) and spent about six hours there. Here’s what we saw:

A day at the world’s largest museum will knock you out. We spent the rest of the night wandering the city for a bit and then taking some time to relax.

We spent the morning inside Notre-Dame. The gorgeous architecture we saw from the outside on our tour lured us back for a closer look at the stunning stained glass on the inside and we can easily saw this cathedral is one of the most beautiful buildings we’ve ever seen. Visiting the inside of Notre-Dame was free at the time we went, but visitors can no longer enter the building because of last year’s fire.

We headed next to the Catacombs of Paris. This is something Peter really wanted to see I, on the other hand, was hesitant. The idea of descending 16 feet underground to walk through a 3-mile tunnel of bones freaked me out. But I will say, it was actually one of my favorite parts of the trip – so cool! The history was fascinating and as you can imagine, we’ve never seen anything like it!

Before catching our flight to our next destination (Spain), we spent more time walking along the River Seine, taking the architecture, the elegance, the atmosphere and the beauty all in one last time… With a ham-and -cheese sandwich in hand of course.

Before signing off we have one more important Paris travel tip – Use public transportation! It can be intimidating to navigate your way around a city that speaks a different language, but the metro system in Paris is very user-friendly – We promise!

Now, go and dream about Paris until we can travel again!